Carrigafoyle Castle near the village of Ballylongford which was built by Conor Liath O’Connor-Kerry in the 1490s was a large tower house which was fairly common in Munster at that time.
During the Desmond rebellion in about 1580 the castle was defended  by 50 Irish and 16 Spanish soldiers.
The castle was bombarded by the forces of Sir William Pelham and the ships’ cannons of of Sir William Winter over two days, six hours each day. In the final assault,  the tower cracked under the impact of the bombardment and the west wall collapsed crushing many of the defenders.
The damage to Carrigafoyle Castle was so severe that it was never repaired although it was occupied for many centuries afterwards.
Most of the occupants were massacred although some may have escaped.
Its ruins still stand, including the outer defences and moat, and the effect of the bombardment is clear to see. 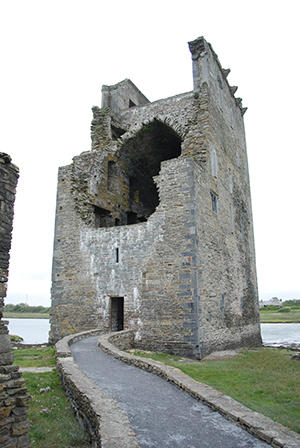 Built on the edge of the Shannon estuary on what was originally an island, Carrigafoyle Castle rises 26.4 meters over five stories and has a spiral stairs in one corner with rooms and the main living spaces opening off it.

Home of The O’Connor Kerry Clan

Carrigafoyle Castle was the main stronghold of the O’Connor Kerry clan, after whom the Itaghticonnor barony was named. They were in possession of Carrigafoyle for long periods over 400 years.
The castle was known as ‘the impregnable castle’ because of it held out for so long against Cromwell’s attacks. It was one of the last castles to have been conquered by the Cromwellians who hanged the occupants.

The castle is a national monument and is managed by The Office of Public Works. The OPW has been engaged in the preservation of the castle for many years and they have partially restored some of the walls and the top floor.
It is possible for visitors to climb the circular stone staircase to the top and take in the panoramic view.

Access to the castle is along a raised path which is sometimes submerged at high tide.
It is open to the public from June to September from 10 a.m. to 6 p.m.

Here is a revealing video by PixieFilms of Ballylongford Choir singing ‘Ode to Joy’ at the top of Carrigafoyle. 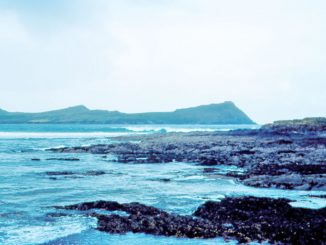 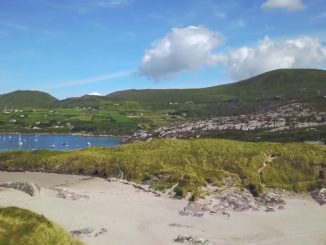