Ballycarbery Castle is a short drive from Cahersiveen on the Ring Of Kerry Route.

It is an old run-down castle with historical significance. At present some of the inside walls have fallen in and it is not accessible to the public. For over 600 years the Castle has stood proud at the mouth of a small bay that has views of Valentia Island and the coast as well as Caherciveen. It was an ideal place to build castle as any approaching enemies could be spotted well in advance of their arrival.

Ballycarbery Castle dates from the fourteen hundreds and was built by the McCarthy Mór family. It is not known if the McCarthy’s  actually lived here but their agents the O’Connells did. The McCarthys were a wealthy trading family and imported goods from Europe into the small bay on their doorstep. Daniel McCarthy pledged his loyalty to Queen Elizabeth I of England and he was called the Earl of Clancarre. He did not produce an heir and on his death the Queen gave his lands to Trinity College Dublin. The land was then subdivided and given to various landlords.
In 1652 Cromwell’s men destroyed the castle with cannon fire. It has not been inhabited since then and has fallen into disrepair.

The Castle is located a short distance from Cahersiveen on the road to Cahergall Fort.  In Cahersiveen turn right into Bridge Street and once you cross over the bridge from Cahersiveen it is visible. It is now covered in ivy but an impressive sight.  It is on private property but one can get close enough to see it. One can park in the little bay and walk up to view the castle. It is a lovely place to spend an hour or two having a picnic, listening to the native birds and the looking at the magnificent Wild Atlantic. It is particularly impressive when the tide is in on a summers evening. 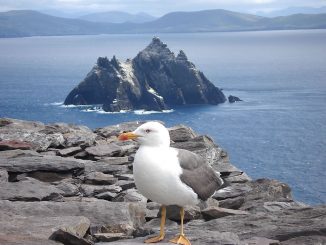